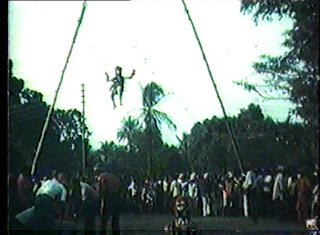 A Legendary Tour Through West Africa
Would it be possible to establish a connection between the roots of Jazz and one of its youngest offshoots? It was impossible to say as to whether Jazz, after a long journey through Western civilisation, where it first began, would be recognized in Africa and accepted as something familiar.
Jazz concerts of American or European musicians were rare in Black Africa. Don Cherry came to Sierra Leone and Liberia in the early eighties. The concerts of the trio Don Moye, John Tchicai, Hartmut Geerken in April 1985 were Guinea's first encounter with live modern Jazz.
The five-week tour did not only take the musicians into the capitals of Sierra Leone, Liberia and Guinea (Freetown, Monrovia, Conakry) but also into villages and smaller towns in the countryside where they met and played with local musicians.
The three musician had been united by the desire to go to Black Africa for the sake of the music. John Tchicai was not only fascinated by the energy coming out of Black African music but also wanted to get to know the area his father came from. When Leo Frobenius, the worldwide known anthropologist, moved back to Europe after a long stay in Africa, he brought his loyal African 'boy' with him to Berlin, who later met a danish girl, and they became Tchicai's parents!
It was with thanks to a friend of Jazz, the former German Embassador to Sierra Leone, Christian Nakonz, that the tour actually came about and that it took them to precisely those countries where freed slaves from America had been resettled after slavery had been abolished. He managed to convince other German, foreign and local institutions to organize concerts and workshops. And so the tour turned out to be a fine example of international collaboration between the German Foreign Ministry and the German Embassies, the Ministries of Culture of the host countries, the Danish Foreign Ministry, the American Embassy in Freetown, the local British Council and the American Sierra Rutile Company. The German Goethe-Institute which is actually supposed to encourage international cultural relationships, after hearing of this tour, had forewarned all the institutions involved in this tour in West Africa about such "activities" in a confidential letter!
In spite of the difficult conditions - poor telecommunications, power cuts, lack of fuel - the tour was very well organized. Everywhere the three musicians' wish of meeting local musician and, whenever possible, having them take part, was welcomed with pleasure.
The first concert in the hall of the British Council overlooking the old city of Freetown was particularly exciting because Tchicai, Moye and Geerken were on stage for the first time together. Only Tchicai and Geerken had previously played together in Kabul, Teheran and Athens (LPs 'The Kabul and Teheran Tapes' Vol. 1 & 2 on qbico 87, 2009 and 'Continent' on Praxis CM 102, 1980).
The three musicians knew each other personally and through their records. The first musical communication took place in front of the 'ears' of the public and was, at first, like cautiously feeling a pulse. When "Milo Jazz" (Tamba Musa, Ahmed Bah, Kokeh Bangura, Momoh Kamara, Boackarie Foday, Amadu Carver, Sidikie Kortugbou), six musicians of the National Dance Group of Sierra Leone joined for the second part of the concert with two djembes, slit drum (n'kali), 2 smal drums (mbiligutii, huban) and agogo (a metallophone), an impressively powerful unbroken rhythm with exciting transformations was introduced and the spell was broken.
The roots of "Milo Jazz" go back to Ebenezer Calender, one of the most popular musicians of Sierra Leone. He recorded so-called palm wine Maringa songs and hits in the older style of Goom-bay. Goom-bay is the source of a modern form of street music called Milojazz, named for the chocolate powder can that, filled with stones, became the signature percussion instrument. The group "Milo Jazz" was founded by Olofemi Cole (Dr. Olo) and later lead by Tamba Musa. Ebenezer Calender died in the age of 73 the day before the Freetown concert took place and the trio together with "Milo Jazz" dedicated that night to the memory of Ebenezer Calender.
Thanks to Walter Mertins from the German Embassy to Sierra Leone who owned one of the first video cameras in that area this documentary film sequences from that historic Freetown concert has been handed down to us. While the trio was in full action, Geerken showed parts of his silent found footage film "the white screen is a red cape" (-verlag ergänzen!) from a 16 mm projector.
The last journey of the trio on this tour was the trip on the ferry across an endlessly broad arm of the sea to the airport of Freetown in the steamy warm haze of the evening twilight. "Milo Jazz" was also on-board and treated the guests to rhythms which made the upper deck swing. The friends played even when the plane took off.
Hartmut Geerken has published a book in german on this west african tour: "motte motte motte" (Spenge: Klaus Ramm 1990).
Sigrid Hauff